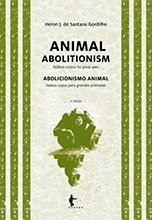 This book aims to contribute to the ethical debate on the relationship between humans and animals and demonstrate that the Law con recognized the great apes as legal subjects with standing to claim the basic rights of freedom in a court. It initially analyses the moral grounding of speciesism which claims that animals lack spirituality and therefore puts the interests of mankind above those of other species. After, from Darwin's theory of evolution it analyses the case Suiça v Gavazza, concluding that this first case that recognized a great ape as a legal subject with standing in a court could contribute to help to save the great apes from violation of their basic rights.

The book deals with animal rights, as the name itself already demonstrates, positioning itself in favor of their defense and protection, through the recognition of a new legal status for some animals. Their are in-depth studies in the areas of philosophy and history of law, which range from antiquity to the nineteenth century with Darwin's theory. The author analyzes the current legal situation regarding the treatment of animals by the Law and opens the discussion about the potential inherent to certain legal institutions to grant a "high status" to animals, entering into the question of the possible emergence of a new ethics regarding the treatment of them, from an incipient "paradigm shift" from anthropocentrism to biocentrism.