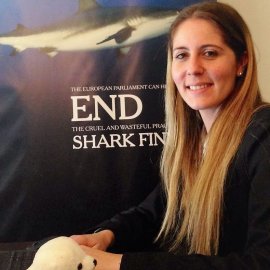 Applying for the Animal Law and Society Master meant complying with my long wanted official and international specialisation in the field of law I was most passionate about: Animal Law. I felt I would be more suitably prepared while working and speaking on behalf of defenseless animals. Leaving your common breadwinner life behind to start something new, moving against the tide, takes great courage but I can say it was a turning point in my life and one of the best decisions I made.
Coursing the Barcelona Animal Law and Society Master is experiencing the first of the kind in European Universities and consolidating the foundations of Animal law as an autonomous and specific field of law alonside the more traditional ones. No longer do we have to resort to environmental law to defend animals: a new discipline especially devoted to individual non-human animals has opened its way and established  itself, much owed by a vigorous and active society´s demand in changing non-human animals´ statute as self-deserving and self-existent sensient beings. This Master is therefore a milestone in achieving Gandhi´s ideal of moral progress and a major step to a self-aware and responsable education.
Always driven throughout the course by the great motto of Jeremy Bentham´s  “The question is not, can they reason? nor can they talk? but, can they suffer?”, it became an adventurous journey of recalling the most fundamental principles of Animal Law, within a comparative law perspective, as well as animal welfare, travelling back to the ancient Roman qualification of animals as things and joining the fighting flood of the current notion as sentient beings. What makes legislation renew itself and translate society´s refreshing demands are the philosophy debates on higher ethics and animal welfare science breakthroughs, so the Master provides for a unique interdisciplinary specialisation, with biological, veterinarian or ethological inputs, let alone the cultural and entertainment representations approach.
Creating a vibrant hub, students are able to team and network with fascinating advocates from different parts of the world and with a diversity of trainings and professions. The chance to address personally worldwide renowned professors with a long life history and testimonials in animal activism is too valuable to miss.
It was a fulfilling life changing experience I hope more students can benefit from in a never-ending inner thinking of non-violence. I cannot thank enough Professor Gimenez-Candela for her guidance, her perseverance and her forward-looking vision which has impacted so many of us all around the world, humans and non-humans.

Why did you choose this Master?

I chose this Master to comply with my long wanted official and international specialisation in Animal Law so I would be academically prepared while working and speaking on behalf of defenseless animals.