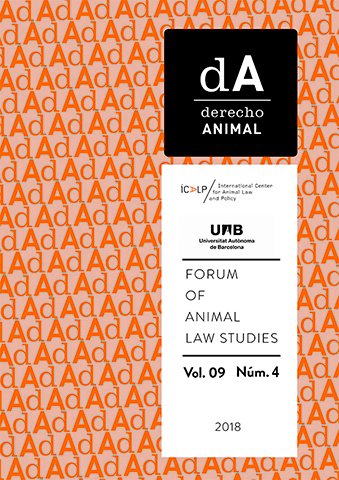 The new volume 9/4 (2018) of the journal dA. Derecho Animal (Forum of Animal Law Studies) has been published, concluding the year 2018 with contents of great interest and extension. Once again, the ICALP shows its importance and its commitment in Animal Law through this new volume of the journal, which is one of the most important in this sector.

The 222 pages include an editorial, three articles, a contribution, a monographic document, two legislative chronicles, two foreign case notes, seven critical reviews of books that have been recently published and four chronicles on the conferences and meetings held during the last months regarding Animal Law.

The subjects chosen to be included cover a number of matters, of wide intellectual and scientific perspective, that go from the legislative developments in Chile (Carolina Leiva Ilabaca), in Michoacán de Ocampo (Brenda Yessenia Olalde) and in Sabadell (Irene Jiménez López y Carles Lorente), to the outcomes of the Argentinian Courthouses (Graciela Regina Adre) and to the contradictions of the judicial system in Colombia (Javier Baquero Riveros). Also included are reflections on the ethic consideration of animals in a sociological sphere (Robert Hall); discussions on new forms of animal therapies (Rosa María de la Torre and Brenda Yessenia Olalde); thoughts on the conditions in which camel transport is carried out in south Africa (Helena Bauer) or the re-examination of the EU law regarding pork slaughter (Mia Scott).

The articles are published in the main scientific languages, as is natural for an international journal that publishes four issues a year. Thus, we publish only what the authors send us in their original language, preceded by a summary and key words in Spanish and English. Also, the table of contents is available in both languages on the website, as well as the author guidelines and other information, thanks to the OJS platform we utilize.

This issue brings together harmoniously notable authors such as Robert Hall, Olivier Le Bot, Rosa Maria de la Torre, Carlo Salzani, Mariko Igimi, Graciela Regina Adre, Francisco Rubio Varas and Helena Correia Mendonça, together with others who have just started their journey in this research, such as Helena Bauer, Melanie Montenegro Pérez, Laia García Aliaga, Sacha Lucassen and Mia Scott, all Alumni of the Master in Animal Law and Society (UAB). Ever since our first issue, we distinguished ourselves for publicising and enhancing the work of new generations of scholars in Animal Law and Animal Welfare Science.

In the publication of a magazine, everyone is important and each one has an essential role: the authors, the members of the Advisory and Editorial Boards, the Section Editors, the Correspondents, the Peers that undertake the evaluation of the works submitted to the journal (double-blind method), who gives shape to the magazine with elegance and speed (Andrés Montilla), who spreads it on social media (Krizia Said Castagno) and - obviously - all the editorial team who deserves a special acknowledgement (Raffaela Cersosimo, Oliver Wookey and Marine Lercier), with a particular mention to the copyeditors Gabriela Chalkia (UK), Chris Sangster (UK), Deborah Villeras (Francia) and Melanie Montenegro (España), without whom it would be impossible to reach the excellence we have imposed on ourselves, not only in the substance, but also in the form.

Animal Law is an emerging discipline in law, to which new talents are being added, conscious of the fact that the integration of animals represents a revolution for legal thought, for the new role that it is being attributed to them for the recognition of sentience. This recognition is gradually going through academic routes, as can be seen in the volume we are publishing, thanks to the great and important presence of University colleagues all over the world. We are proud to count on the contribution of famous professionals in Animal Law because, since we are dealing with a subject in continuous evolution, we require the contribution of those - from veterinary, bioscience and law practice - who know which interests of animals should be taken into consideration and protected.