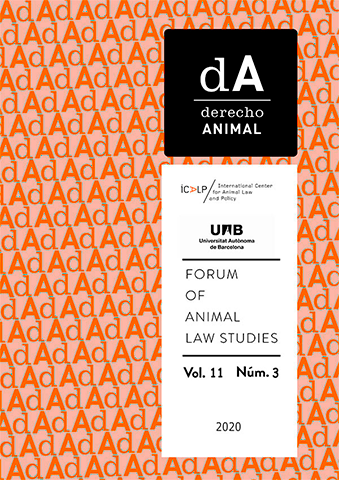 Volume 11/3 (2020) concludes the work for this journal carried out during months dominated by the uncertainty of the pandemic. The year 2020 will remain in our memory as the year in which we realized that we can - and should - live with our heads high and a cheerful heart, even if we are faced with difficulties.

The big news for those of us who make the journal has been the recognition of our indexing in SCOPUS. A long process of reviewing our work has positioned us as a source of reference within the legal field, in the emerging and increasingly solid subject matter of Animal Law.

Consistent with the commitment to reach many readers, we offer a selection of topics of high quality and interest that aim to position animals in the place that Law owes them: that of beings capable of feeling, expressing themselves, interacting, and showing us that life is solidarity of all with all, and with the diversity of nature.

Volume 11/3 (2020) consists of four Articles; a Contribution, two Documents, a Legislative Chronicle, a Sentencing Commentary and a bibliographic review. The journal always selects, thanks to the work of experts who review the manuscripts of the authors, the best works and those that represent a step forward in the fight for animals, from the academic perspective that is our own.

Professor Mª José Bernuz (University of Zaragoza): The instrumentalization of animals for the achievement of political objectives: the parliamentary debate on bullfighting in Spain and Dr. Juan Ignacio Codina (journalist and writer), Civil and religious legislation against bullfighting: historical prohibitions of bullfighting shows in Spain between 1567 and 1936, address bullfighting shows from different perspectives. Studying a controversial issue, not without interested and passionate aspects, is our magazine's determined commitment to quality. Only the documented judgment of experts can reveal all the cruelty that is hidden behind a spectacle that instrumentalizes animal suffering and tries to justify it with the use of two great covers: Culture and Tradition. Prof. Joaquín David Rodríguez Alvarez (Universitat Autonoma de Barcelona), opens the debate of animals in armed conflicts, Trans-species warfare: Animals in human conflict, to which the law does not grant the status of victims, even though in some countries - not our own -honorary memorials are dedicated. The article section is completed with the esteemed Prof. Mauro Leonel Fuentes Sáenz de Viteri (University of Guayaquil), which emphasizes the recognition of the rights of nature in the Constitutions of Ecuador (2008) and Bolivia (2009), concluding the process of recognition of animal rights in Latin American legal systems, Animal rights: an approximation to the Rights of Nature in Ecuador.

The reflection of the renowned French researcher, neurobiologist and philosopher Georges Chapouthier, Respecting animals to respect humans, highlights the importance of the common destiny of humans and animals, within the framework of interdependent respect.

Two extensive documents tackle two crucial aspects regarding our treatment of production animals. On the one hand, the study by journalist Rebeca García focuses on the treatment of these animals by the press, The power of discourse in the media: press analysis of the representation of farm animals, and an original investigation by Silvia Meriggi looks at the welfare of animals in long-term transport in Europe, The harmonisation of animal protection during transport in the European Union – Analysis of the sanctions system in Italy, Romania and Spain.  The joy of publishing these two interesting studies is enhanced by the fact that both authors are Alumni of the Master's Degree in Animal Law and Society, which serves as a further example of the maturity of our studies and a tribute to the efforts of the students of the Master’s, the tutors of the research papers, and the entire faculty.

In the Legislative Comments section, Chilean lawyer José Ignacio Binfa Alvarez, Director of the Lawyers for Animals Foundation, deals with the Crime of Animal Abuse in the 2018 Draft New Penal Code of Chile, from a critical revisionist perspective. Another important Latin American voice is that of Prof. Rosa Maria de la Torre Torres (Universidad Michoacana de S. Nicolás de Hidalgo), who reflects on the impact of animal welfare in a recent judgment of the Mexican Constitutional Court Animal welfare as an implicit constitutional principle and as a proportionate and justified limit to fundamental rights in the Mexican Constitution.

Last but not least, the journal is pleased to publish a critical review by the Lawyer of the Administration of Justice, Iván Fructuoso about the recent book by Marita Giménez-Candela. Animal transition in Spain - Tirant lo Blanch (Valencia 2019) 363p., which makes up the sixth volume of the "Animals and Law" Collection published by the Editorial “Tirant lo Blanch” in collaboration with ICALP.

Once again, we are grateful for all teamwork when editing a journal. The names of the members of the Editorial Secretary, splendidly coordinated by Raffaela Cersosimo (Italy), merit being highlighted in order to thank Oliver Wookey (United Kingdom) and Melanie Montenegro Pérez (Spain)) for their stimulating collaboration. Likewise, we want to highlight the great design work done by Andrés Montilla and the dissemination of our results, undertaken by Krizia Said (México) with much creativity and commitment. Finally, we reiterate the thanks that a journal like ours owes to reviewers, whose work is essential, and the quality of contrast is needed to continue growing. 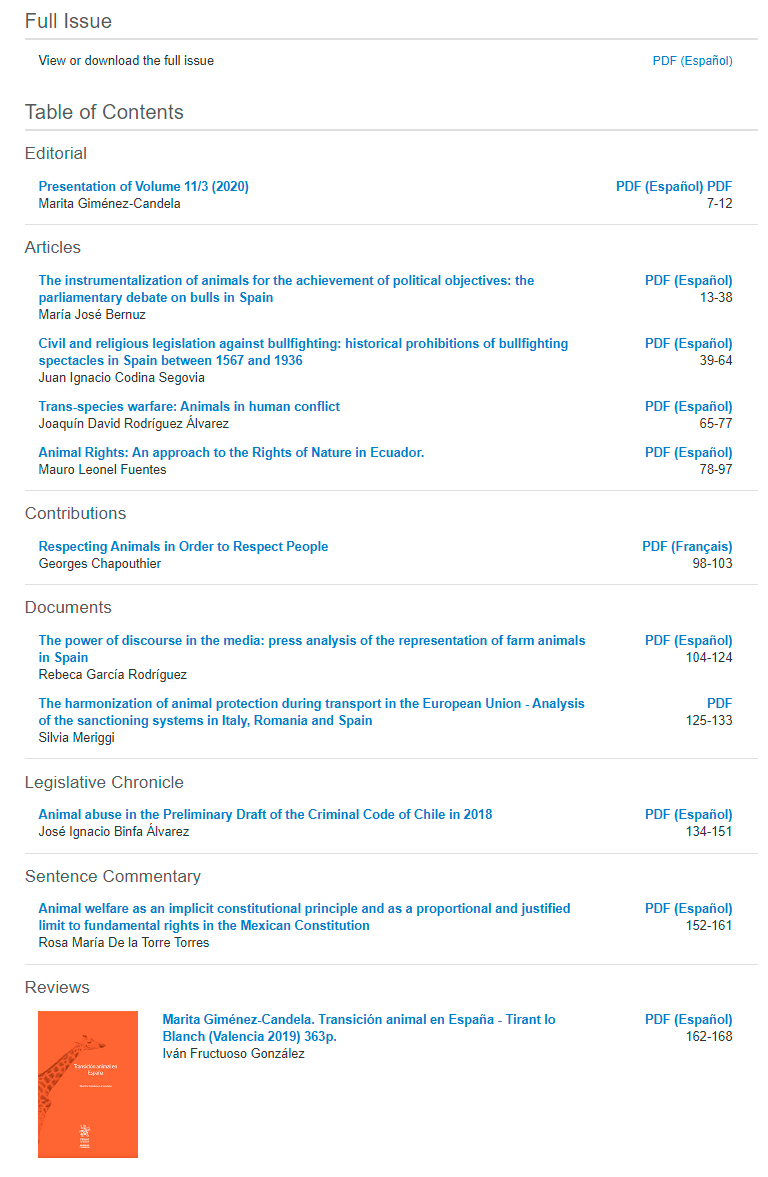