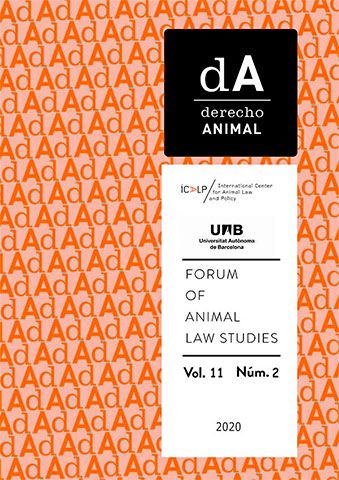 We are glad to announce the release of the vol. 11/2 (2020) of dA. Derecho Animal (Forum of Animal Law Studies). Founded in 2009 by Marita Giménez-Candela, Professor of Law (Autonomous University of Barcelona) and pioneer of Animal Law in Europe, this journal is peer reviewed (double blind). This issue includes an editorial, three articles, a contribution, two documents, a legislative chronicle, and two case notes.

The vol. 11/2 starts with the reflexions by the Editor in Chief on the current pandemic and the collapse of the past, which introduce the presentation of the journal’s issue. According to Professor Giménez-Candela, we are faced to “a situation in which parallels with the scourges that past civilisations have experienced, as was the case in Rome, are clearly perceptible”. In her opinion, “it is about establishing a new ethic of integrated health that does not exclude animals, but includes their protection, and harmoniously integrates human beings with nature. A new ethic that must share the premise that the Law is part of the solution, but not the whole solution”. This line characterises the ICALP and the journal.
Two articles explore the legal treatment of companion animals as a result of the pandemic. Dr. Guillermo Cerdeira Bravo de Mansilla, (Professor of Civil Law. University of Seville) studies the consequences of allowing dog walking and visits to veterinarians in Spain during the state of emergency, as set out by RD 463/2020, of 14 March, in his article “Veterinary clinics and walks with pets before COVID-19: an essential activity for the welfare of the animal as a sentient being”. The article by Brazilian professors Luciano Rocha Santana (Universidade Federal da Bahía) and Thiago Pires-Oliveira (Universidade da Sao Paulo), “Reflections on the responsible guardianship of companion animals in Brazil” deals with tenancy conditions of companion animals, highlighting the importance of the new federal law 13.426/2017 for adapting public policies relating to the living conditions of companion animals, to the proposals of animal sentience.

Two articles address important aspects of the legal treatment of animals in China. Professor Gao Li-hong (Zhongnan University of Economics and Law. Wuhan, China) examines, in “The laboratory animal legal system of China”, the two fundamental pillars on which the treatment of animal experimentation in her country are based; governmental supervision and the third-party certification system. The article by Professor Jiwen Chang (Hunan University Law School and the School of Humanities of the China University of Geosciences) deals with an aspect of Chinese tradition – the consumption of wild fauna – which has been subject to regulation and prohibition in recent months. The article “Interpretation of the Decision of the Standing Committee of the National People's Congress of China to Abolish the Bad Habit of Consuming Wildlife Mindlessly”, makes reference to new legislation passed in China in February 2020, which aims to eliminate the risk of a potential propagation of illnesses between people and wild fauna, as well as safeguard public health and maintain ecological balance.

Two articles in this latest volume address the relationship between governance and animals. In one of them, “Animal Politics: advocating for full access to health care for companion animals”, Pablo Serra Palao (Investigator at the Faculty of Law at the University of Murcia) considers the creation of a genuine interspecies community politics, while the article “A Global Institution on Animal Protection” by Carolina Fumagalli, (Lawyer and former student of 5th online edition of the Animal Law Master) deals with this question from a global perspective, taking as a starting point the pioneering investigations in the area of globalisation and the animal world of Professor Anne Peters, Director of the Max Planck Institute for Comparative Public Law and International Law in Heidelberg (Germany).

With this volume 11/2 (2020) we are also publishing the question of animal-assisted therapies that are in need of solid, reliable regulation in Spain. This topic is addressed in this volume thanks to the work of Antonia Eraud (equine therapist, writer and artist, student of the 6th edition of the online Animal Law Master) entitled “A proposal for equine therapy intervention for children with ADHD from an animal protection perspective”.

In the Sentence Commentary section, we are publishing two novel and highly interesting contributions. The first commentary is by Manuel Rodríguez Montserrat (Professor of Criminal Law. University of Cádiz) entitled “The protection of the Iberian lynx under criminal law: case note on the judgement 150/2013 of June 6, pronounced by Jaén Provincial Court”, in which he makes an analysis that takes circumstantial evidence as the central axis of the trial, to analyse the criminal acts that aim to end the life of a protected and endangered species, such as the Iberian Lynx. In the second commentary, Anna Mª Estarán López (Coordinator of the legal area of FAADA) addresses “The definitive precautionary measures in the crimes of animal abuse. Commentary on the Orders of the Court of Manresa and Esplugues de Llobregat”. The author deals with two pioneering decisions in Spain, recently ruled thanks to the author’s own intervention, which address the cautionary penal measures in cases of animal mistreatment anticipated by art. 337 of the Criminal Code, consisting of definitive confiscation and adoption, which highlights the need to bring about reforms in the procedural area of coercive measures when dealing with animal mistreatment.

We are grateful to the authors, the peer reviewers, the advisory and editorial boards, the communication manager and the Webmaster for their competence, commitment, and enthusiasm. Let us continue to work for animals! 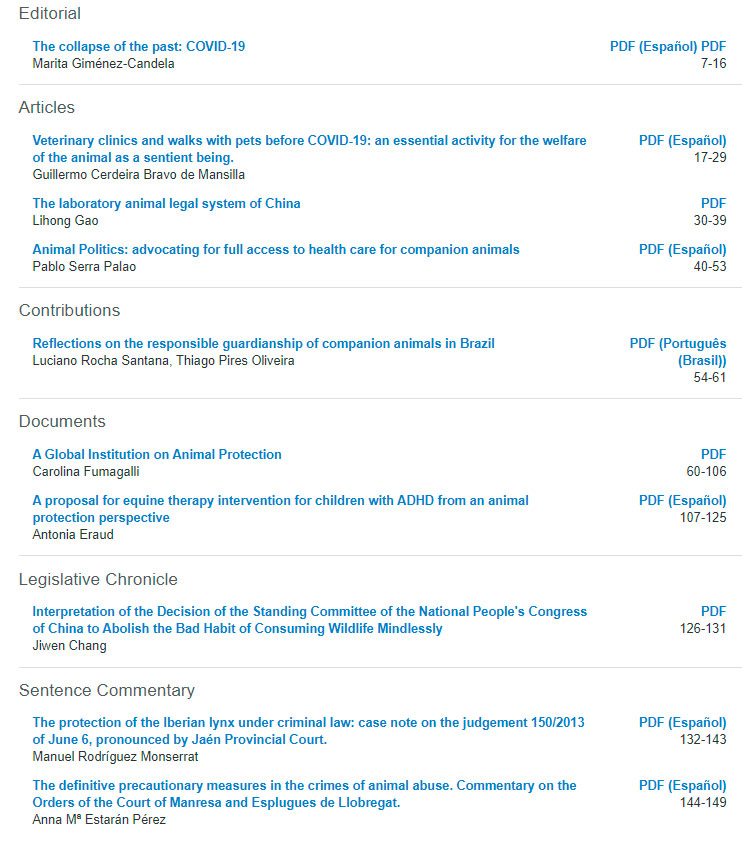