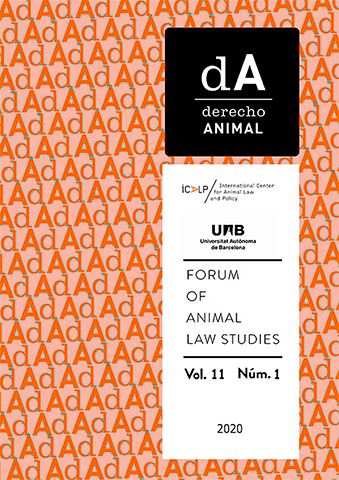 The volume 11/1 (2020) of the journal dA. Derecho Animal (Forum of Animal Law Studies) has been published. Also this year, we invite our readers to join us in reflecting on some current issues and trends of global and local importance relating to Animal Law. This volume brings together world-class research talent, which is the trademark of our journal since its inception. This time, it includes an editorial, three articles, a contribution, a document, a case note, and three critical reviews of books that have been recently published.

Marita Giménez-Candela, our Editor in Chief, kicks off the 2020 season with her presentation of the volume 11/1. By critically reviewing the content of this volume, she focuses on the emergence of new issues and challenges, which might necessitate a paradigm shift in the way that humans treat animals, particularly those belonging to wildlife.

One of these issues is the spreading of Covid-19 in several countries, which is currently in the news headlines all over the world. Regarding the China case, Jiwen Chang (Director of the IREP, DRC, State Council of China, Professor at Hunan University Law School and School of Economics and Humanities of the China University of Geosciences) and Jiezhong Chang (JD Candidate at Wake Forest University, Research assistant at the IREP, DRC, State Council of China) explain the need for a reform of the Wildlife Protection Act, which should include a prohibition of hunting, breeding, transferring and eating of wildlife, as well as a liability system to find the guilty parties and determine who should pay.

The vol. 11/1 (2020) continues to advance academic discourse about the legal protection of fish (in fact, we published an interdisciplinary Thematic Dossier in the previous vol. 10/4 of the journal: https://revistes.uab.cat/da/issue/viewIssue/42/10-4-pdf-dossier-es). This is an important but still unknown issue, especially considering there are estimated to be more than 100 billion fishes killed per year, just in aquaculture farms. To add an important building block to this research, Marita Giménez-Candela (Law Professor, UAB, Director of the MA in Animal Law and Society and of the ICALP), Joao L. Saraiva (Director of Fish Ethology & Welfare Group. University of Algarve) and Helena Bauer (MA in Animal Law and Society, UAB; Animals’ Angels) analyse the EU legal rules and the impact of international animal welfare standards set out by the World Organisation of Animal Health (OIE), for the fishes in European aquaculture.

The vol. 11/1 (2020) also welcomes other investigations that show there is another way of looking at our relationship with the animals. According to Juan José García-Rebollo del Río (Universidad Autónoma de Querétaro, México; Visiting Researcher, ICALP), an eco-sensocentric ethics could help legislatures and judges to deal with animal matters. Monica Soares Botelho Padilha (Universidad de São Paulo, Brasil) and Marcos Lopes Padilha (Universidad de São Paulo, Brasil) explain the inconsistencies that exist among the provisions on the wildlife in Brazil and in the State of San Pablo. Andrea Herbert Garrido (Universidad Veracruzana, México) presents the results of a research carried out in Mexico about the link between domestic violence and animal abuse, which is particularly interesting given that most of the studies were conducted in the United States of America. On the theme of abuse, Álvaro de Juan García (UAB) presents his comments on a recent case law (SAP Albacete 30/2019 of January 21st) that deals with article 337 of Spanish Criminal Code on mistreatment of animals.

The book reviews are always so important in our editorial outlook. This time, we propose to our readers some critical reviews of three books: “Direito da Saúde Animal” written by Luciano Rocha Santana and Thiago Pires Oliveira (reviewed by Laerte Levai, Prosecutor, Brasil) that deals with animal health and Animal Law; “Animal Law in the Third Reich” written by Martina Pluda, MA in Animal Law and Society, UAB (reviewed by Adolfo Sansolini, Director of Animal Welfare And Trade) that analyses the legislation on the protection of animals in Germany, under the third Reich; and “La peau de l’ours” written by Joy Sorman (reviewed by Àlex Peñaranda, MA Animal Law and Society, UAB) that invites the reader to put himself into the shoes of a strange creature, who was half man, half beast.

The members of the editorial team (Marita Giménez-Candela, Raffaela Cersosimo, Nuria Ménendez de Llano, Melanie Montenegro Pérez and Oliver Wookey) are grateful to the authors, the peer reviewers, the advisory and editorial boards, the communication manager (Krizia Said Castagno) and the Webmaster (Andrés Montilla) for their devotion and professionalism.

We share the Earth with other living creatures. We need to raise awareness, and often academia helps to do that. Through this interdisciplinary journal, we aim to give our readers a scientific perspective to the relevant current issues that involve humans, animals, and the environment. 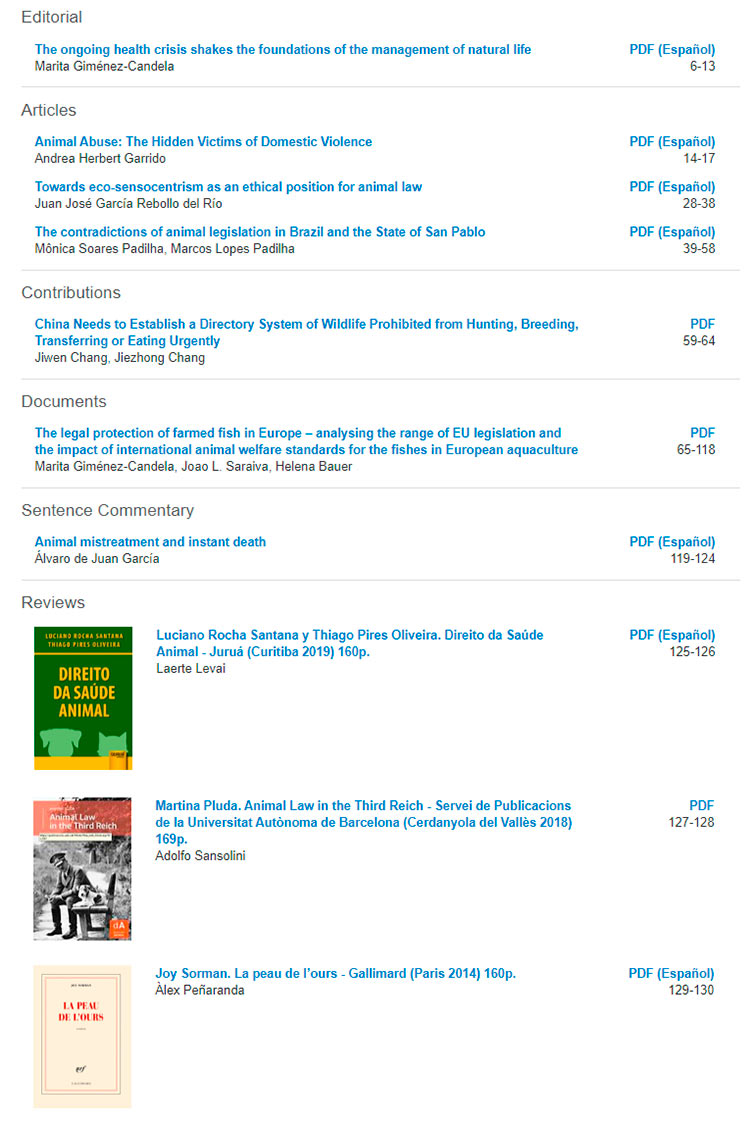