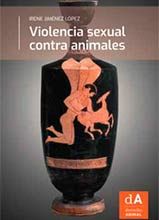 Sexual abuse of animals is a cruel and atrocious form of mistreatment, not only by the animals physical damage, but also because they imply an absolute disregard towards the dignity of the animal that suffers them.

In recent years, several cases of bestiality have come to light in Spain, as is denominated sexual violence against animals in our country. More and more countries have changed their legislation to include the criminalization of such practices. Such a context has led to the criminalization of sexual exploitation of animals in the Spanish Criminal Code in 2015 through the reform operated by the legislator in the field of sexual exploitation of animals. However, the questions we must ask ourselves are: Is this enough?. Are animals truly protected from sexual abuse?.

BIO:
Irene Jiménez López graduated in Law from the Autonomous University of Barcelona (UAB) in 2014. Subsequently, in 2016, she obtained her Master's degrees in Law and a Master's degree in Animal and Society Law, also at the UAB. She is currently a practicing lawyer and researcher at the International Centre for Animal Law and Policy (ICALP). She is also a member of the Commission for the Protection of Animal Rights of the Ilustre Colegio de Abogados de Sabadell and a member of the Editorial Board of the legal website. www.derechoanimal.info.