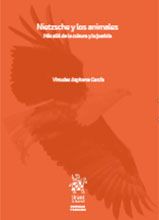 NIETZSCHE AND THE ANIMALS The philosophical study of the animal should be one of the most important and relevant topics in the field. But, instead of that, throughout history we are met with a disappointing silence. Animals keep being invisible in politics and law. Over the past century, some voices have been raised in support of animals, though this advance has been obstructed by the horrific conditions in which animals now “live”, in our technological civilization. The philosophical study of animals has therefore remained the main unattended goal in the field, preventing us from rethinking our relationship with these beings. Justice for animals is absent in the ethical, legal and political discourse. Yet justice applies to all sentient beings, otherwise it is no justice at all. Animalism is the new Humanism. This book provides a possible explanation as to why we are capable to live blindly and silently amidst such horrors. It contains an analysis of the social, economic, legal and religious drivers of our cultural construction of what we call “the animal”. The author exposes the inadequacy of prevailing legal structures to provide justice for animals. These are the big paradoxes: we seek to impose rules on nature, but nature has no rules; we try to live following the natural law, yet this does not exist. Law, even justice, are cultural constructions, too human, and thus dominated by speciesism. The book also denounces the numbness of the law in this area and proposes that the burden of proof be shifted in animal cases. The position advanced in this book relies on a direct reading of Nietzsche’s original texts, which have many times fallen victim to either controversial or manipulated interpretations. Nietzsche is the philosopher who affirmed life on Earth, reflecting on the animal that we are, and the animal that we persecute (in Deleuze’s words: “L´animal que je suis et l´animal que je pursuis”). The animal is at the heart of his philosophy, the arjé of his thoughts. He proposes new principles shaped in the mold of generosity, instead of compensation or revenge, to mark a new relationship with animals. The new man, the human being of the future, will have to rediscover the meaning of Earth. Not without her/his animals.