Lucy's Law: The story of a little dog who changed the world 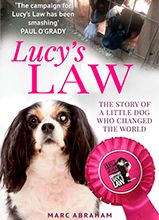 This book tells how a law that prohibits brokering in the sale of dog and cat puppies under the age of six months, was adopted thanks to the sad story of a little dog. The author of the book is Marc Abraham, a veterinarian who fought for this law. The little dog is Lucy, a Cavalier King Charles Spaniel who spent many years locked in a cage of a Welsh puppy farm, for the sole purpose of producing puppies intended for the market. Lucy was released in 2013, but her poor health worsened some time later. After her death, Lisa Garner, the woman who adopted her, launched the #LucysLaw campaign to call for an end to this form of exploitation. On April 6, 2020, Lucy’s Law entered into force in England.