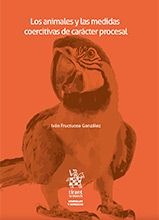 "Animals and coercive measures of a procedural nature" responds to the regulatory vacuum existing in Spain regarding the possibility that an animal becomes affected by an executive decision adopted within a judicial procedure. The procedural laws in Spain allow animals to become the direct object of executive measures (seizure, inbound, intervention or confiscation, etc.), as well as to be indirectly affected by other procedural situations such as evictions, orders for the protection of victims of crimes and resolutions adopted in separation and divorce proceedings. In any case, the precepts to be applied were initially designed for inanimate objects, and are inadequate to guarantee the welfare of the affected animals and the effectiveness of the process itself. The work will try to offer an answer to the problem pointed out making use of the current legislation, doctrine and jurisprudence. However, the lack of a specific regulatory framework leads to the necessary reform of Spanish procedural laws, so the conclusion drawn is the need to modify Spanish procedural laws, thus adapting them to the declaration of animals as sentient beings of Article 13 TFEU and overcoming the postulates of the animal-thing that still permeate the Spanish procedural regulations.