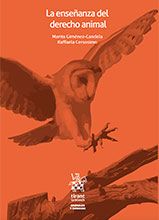 This book is an innovation and fills an important void amongst current literature on Animal Law, as the theme regarding a programme for this discipline has not yet been tackled through a practical approach supported by rigorous research. The book will be useful in Europe and Latin America, as well as in the Anglo-Saxon world, where nothing similar on this theme has yet been published. Today, dealing with why and how to teach Animal Law is based on three reasons:

To face the challenges of this new discipline, its teaching requires a holistic mind and interdisciplinary approach. Here we find a concrete method of educating and forming a new generation of researches and professionals, with the unavoidable foreword that animals are sentient beings that have to be recognised as such by the law. The strength and the originality of this approach arises from the personal experience of the authors, consolidated for years at an international level, within ICALP (International Center for Animal Law and Policy) at the Autonomous University of Barcelona (Spain), through a Master in Animal Law and Society and the undergraduate course “Animal Law and Welfare”.