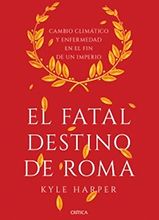 Can climate change and infectious diseases contribute to the fall of a great empire? This original book by Kyle Harper (University of Oklahoma, USA), published in 2017 under the title "The Fate of Rome" and translated into 12 languages, shows those decided the fate of the Roman Empire. Moving from the prosperity of the climate "Optimum", which corresponds to the warm period that characterised the Mediterranean from 200 B.C. to 150 A.D., the author describes the subsequent climate and biological changes that determined the fall of Rome: violent epidemics triggered by viruses and bacteria, and colder seasons caused by volcanic eruptions and reduced solar activity. These changes took place in a society also weakened by internal political struggles, an unsustainable defence system, barbaric invasions and other circumstances, which other authors investigated already.