Animal Law in the Third Reich 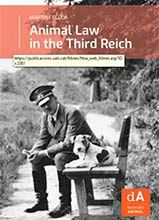 What do National Socialism and animal law have in common? Indeed, when talking about animal welfare and species conservation, one cannot overlook the fact that the laws emanated in the Third Reich were amongst the ﬁrst to regulate these matters in a structured and uniﬁed manner. For obvious reasons, though, the topic of animal protection in Nazi Germany has been overshadowed by the human tragedy, which occurred in this period of history.

How could the Nazis have been concerned about animals whilst perpetrating appalling acts against humans? It would be easy to dismiss their benevolent disposition toward animals as hypocritical. Nevertheless, several associations can be made between the German attitudes towards nature, the Nazi ideological and behavioural dynamics, and the subsequent provisions. Undoubtedly, the question on the authenticity of the motivations behind the Nazi animal welfare and protection movement is difficult to answer. However, there are enough references to give some indication as to their true inten-tions: to create a progressive legislative framework or a legal veil for propaganda? From German Romanticism to anti-Semitism, this book bridges the gap between two seemingly unrelated topics.

BIO:
Martina Pluda was born in 1989 in Milan, Italy. She has been working as a freelance journalist for several periodicals, which later led her to contribute to the Spanish digital platform for animal law, dA – derechoAnimal Web Center and the Research Group ADS (Animales, Derecho y Sociedad). She studied both Law and Economics at the Paris Lodron Universität Salzburg and after that she specialised in Animal Law at the Universitat Autònoma de Barcelona. After that, Pluda worked on legal research and campaigning for several NGOs, as well as European Union institutions in Spain, Belgium, and Austria. She currently lives and holds a leading position as animal welfare advocate, lobbyist, and lecturer in Vienna. With her work, Pluda is striving to increase public awareness and improve the legal protection of animals.