Publication of 'The Legal Framework of animals in Chile, Colombia and Argentina' by Dr. Carlos Contreras

The second volume of the collection “Animals and the Law”, titled: “THE LEGAL FRAMEWORK OF ANIMALS IN CHILE, COLOMBIA AND ARGENTINA” presents the research carried out by Dr. Carlos Contreras on the legal ordinances and public policies which affect animal welfare and Animal Law in Chile, Colombia and Argentina. 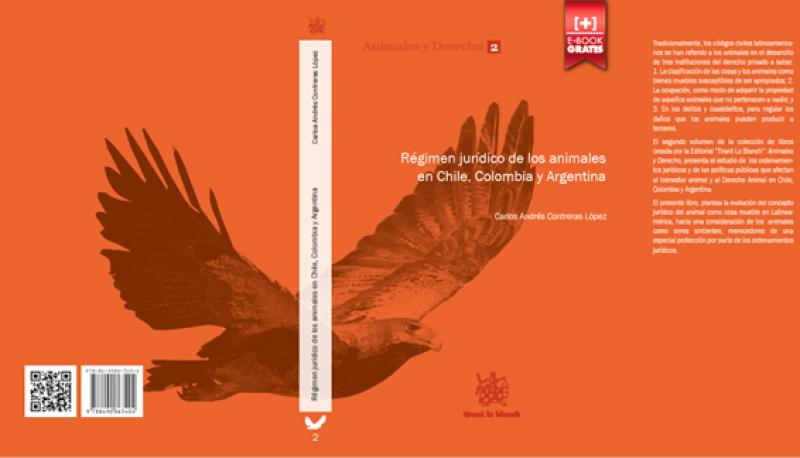 A short while ago, Latin American legal ordinances in their civil codes had referred to animals only in developing three institutions of private law, specifically: 1. The classification of things and animals as moving goods (or livestock) with the possibility of being appropriated; 2. Occupatio, as a way of acquiring property of those animals which do not belong to anyone; and 3. In crimes and torts, to govern the damages which animals may cause to third parties.

This book documents the most notable legal advances which have occurred in Chile, Colombia and Argentina regarding animal protection and the evolution from the conception of animals as movable goods, toward their consideration as sentient beings, deserving special protection.

The Author is Dr. Carlos Contreras, Attorney from the Pontificia Universidad Javeriana de Bogotá; Graduate in Law from the Universidad del País Vasco; First Doctor in Animal Law in the Spanish State (UAB). Currently an Associate Professor of Roman Law; Professor and Educational Coordinator of the Master in Animal Law and Society in the Autonomous University of Barcelona.  Dr. Contreras is Adjunct Editor of www.derechoanimal.info, and member of the International Center for Animal Law and Policy (ICALP) and the EuroGroup for Animal Law Studies (EGALS)

In the framework of II Global Animal Law Conference, celebrated in the Autonomous University of Barcelona on July 10 and 11, 2014, the Tirant Lo Blanch Publishing House and what now constitutes the Study and Research Center (CER) called: International Center for Animal Law and Policy (ICALP)presented the first legal collection in Spain dedicated to professionals and researchers interested in Animal Law: “Animals and the Law”.  The first book published from this collection (the book was the first in Animal Law published in Spain and the first with international participation) was entitled “Animales y Derecho. Animals and the Law” (2015) edited by David Favre (Michigan State University) and Professor   Marita Giménez-Candela Ph.D.  (UAB) Director of the collection.