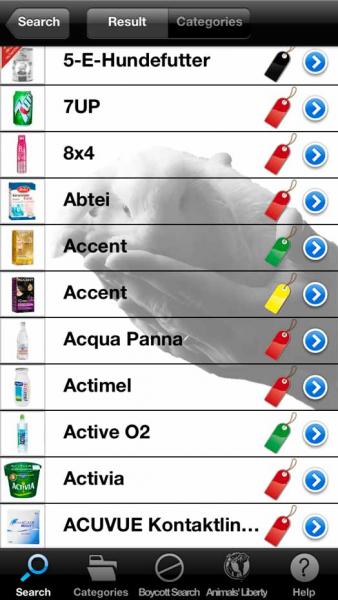 According to the motto “the consumer has the power” (“der Verbraucher hat die Macht”), Animal´s Liberty has set its mission to create a platform, which informs consumers about animal abuse and shows them how on a daily base they can make their small contribution to animal protection. Only consumers have the power to make a change in the long run! Throughout our purchasing choices we can influence greatly a company´s production and conduct. A change of the status quo can only be achieved when companies face financial deficit, leading them to adopt new policies aimed at the protection of animals and also consumers.

Bearing this in mind, Animal´s Liberty has created a transparent database called “who does what” (“wer macht was”), which gives information on which companies are currently operating with animal testing and must therefore be boycotted by consumers. The database also lists the name of producers behind all those no-name-products from discounts or which carry the name of the supermarket itself, which are often the same companies that prefer to remain anonymous for their unethical practices. The database comprises any kind of products one can think of: from housekeeping to gardening, from breakfast cereals to desserts, from shampoos to tissues, from baby creams to cosmetics, from restaurants to hotel chains, office material, clothing, batteries, cigarettes, and even contraceptive devices; in all 67 different categories.

To allow consumers to make an ethical choice, in an easy way, anytime they go shopping, Animal´s Liberty made this database accessible not only online, but also throughout a mobile application, which can be downloaded for free from the app store for IOS and Android. So when you are at the supermarket, drugstore, pharmacy, or shopping mall you just need to take out your smartphone and type in the name of the product you would like to purchase and throughout the research in the database, the app will tell you if it´s a green, yellow, red, or black product.

Green stands for animal-testing-free, vegan products, recommended as alternatives to red ones and 100% safe to buy. The yellow label means that the product is animal-testing-free but not vegan, since other kinds of animal abuse cannot be excluded with certainty. For example all products from the category “food” which are of animal origin and therefore always related with animal suffering, are marked yellow. Even so-called organic or biological products don't guarantee that there hasn´t been any animal suffering in the process, as a 2008-2013 investigation of PETA in “organic slaughterhouses” of Southern Germany has shown (watch video), thus explaining Animal´s Liberty choice. The consumer is left with a personal decision in this case.

Red products are those, which do not respect the animal protection criteria set by Animal´s liberty and are to be avoided. Red-labelled are the products, which are in conflict with an ethical and moral understanding, without increased awareness of the consumer, such as animal testing, fur, foie gras, etc. As well companies that are demonstrably (using text, image or film) related to animal cruelty are marked as red. When labelling Animal´s Liberty considers also the relationships between companies that are associated with this cruelty to animals. Therefore also a manufacturer's product is labelled red, when this company is connected or subordinate, or has a corporate law participation ratio, or business relationships with companies that are linked with cruelty to animals. This is to ensure that no company, which operates cruelty to animals, is ever supported. For this reason in the case of parent companies that are not related to animal cruelty, only the subsidiaries, which on the other hand are, will be labelled in red; if the products of the parent company and related companies are not associated with the issue, they are then labelled yellow or green. The purpose of this is to show the parent company that animal-abuse-free products are best sold and lead to more revenues and that it is therefore meaningful for the company to offer green products at all its levels. Another example of red labelling is for products originating or associated to countries where animal testing of cosmetics or their raw materials is still allowed or required (such as China), and no evidence is given to prove otherwise.

Worth mentioning briefly is also the category “pet food”. Animal´s Liberty differentiates between the so-called "acceptance tests" and "animal tests". The first ones are marked yellow and regard animals in their familiar surroundings that are provided with food to try and the owners will then share their experience with the manufacturer. The latter, instead, refer to animals, which are kept for a period of time in a specially designated facility (e.g. in a laboratory) for testing and have hence a red label.

Finally the black label means that the researches and inquiries done are, for the moment being, not sufficient to exclude or confirm animal abuse in connection to a certain product and should consequently be replaced by a green alternative.

The app of Animal´s Liberty is for now available mostly in German and it comprises both the products of this region and the ones of major multinational companies, which are sold worldwide as well, such as Unilever and P&G. Nevertheless anyone, whether German-speaking or not, is able to understand the colour code and can download the app, cause as Animal´s Liberty is convinced of, “only together we are strong enough to help animals”. By leaving a red-labelled product on the shelf the consumer will contribute to the making of a mentality change and to the fight against animal testing, cruelty, and abuse.

For more information visit: www.animalsliberty.com or www.wermachtwas.info. The database is updated constantly, but should you not find a product or should you be aware of any new alternative that could be added to it, send an email to wermachtwas@animalsliberty.de or send an SMS to +49 176 71 99 07 19.