Animal welfare on the dining table

The website of Derecho Animal introduces a new monthly column entitled "Animal welfare on the dining table" which will deal with animal welfare and ethics issues connected with the the products that can be found daily on our tables and will offer alternatives for some cruelty-free meals. The authors of the column will be two current students of the Master in Animal Law and Society  Maria Isabel Aristizabal Bustamante and Chiara Bellone De Grecis .

Maria Isabel Aristizabal Bustamante is a psychologist from the Pontificia Universidad Javeriana in Bogota, with emphasis on political and civic education and social psychology. She is also coordinator of social and environmental projects for the company Productos Naturales Aral Thel in Armenia (Quindio, Colombia). She is also the coordinator of Amar es Más, a small Colombian animal shelter, which saves stray cats and dogs. It also focuses its efforts in showing the local community the contexts in which animals are exploited, offering simple alternatives to change daily habits to help reduce that suffering.

Chiara Bellone De Grecis has a bachelor in Political Science and a master in International Relations, from the LUISS Guido Carli University of Rome. She is very intrested in animal law and welfare issue and has presented her master thesis on Ethics and Animal Rights, with a focus on captive wildlife.

The milk industry and the vegetable alternatives: recipe for rice and vegetable milk pudding

Dairy production is one of the industries that causes most animal suffering around the world. Various animal protection groups and other organizations have already been in charge of making public the deplorable conditions in which animals live on dairy farms and industries. Although it may seem incredible, cheese, yogurt, milk and other dairy products that arrive on our table are far from being obtained from those "happy cows" that industries made us believe exist.

Animals’ Angels is an organization for animal protection specialized in the inspection of farm animals’ transportation and which has managed to picture, among other things, the daily lives of the cows in Germany’s dairy industry, the biggest one in the European Union. In its experience of over 15 years, the organization has discovered that “to ensure that dairy cows produce as much milk as possible, they are artificially inseminated time and again to give birth to one calf after the other”. Moreover, the newborn calves are immediately separated from their mothers to, depending from their sex, either be raised for dairy production or to be sent to slaughter.

During the time passed in the stables, cows spend from 16 to 20 hours without being milked (despite regulation dictating a maximum of 12 hours) in order to increase the milk supply to 30 liters per day. This causes great pain to the animals, leading to infections, mastitis and other diseases. Additionally, cows have little room to lie down and eventually end up suffering injuries, which are not treated in time and impair their mobility.

Some farms do not even provide access to sunlight and many of the cows that live there spend their entire lives tied to one place. We tend to think that cows in the dairy industry do not die and that such a fact may justify our dairy consumption, however, over 40% of the cows in this industry are sent to slaughter each year. Others remain to be exploited in the farms for the rest of their lives.

Additionally it is important to consider that various studies claim that milk consumption is largely responsible for damages to the intestinal environment, for mucosal inflammations and for increased allergic reactions in humans (Hiromi Shinya, 2014). The World Health Organization (WHO) itself has already expressed its opinion concerning the damages to the human body deriving from excessive consumption of dairy products, not only for their high content of toxins, but also for its low iron content and questionable intake in terms of calcium for humans in early ages.

The alternative options to cow’s milk are infinite and delicious. It is now possible to find various types of vegetable milk in the supermarkets, with different prices and flavors to choose from. Concerning proteins, it is important to know that soy milk has a high protein content, which accompanied by a diet rich in foods like legumes, peanuts, seitan and tofu, among others, generates great benefits for the body. Hazelnut, sesame, almond and other nuts’ milks, are high in calcium and in beneficial vegetable fats, which help for a better functioning of the intestine and thus contribute to a healthier skin.

With so much variety, recipes and combinations in this new kitchen are endless and so we are pleased to teach you a new recipe for a good dessert: 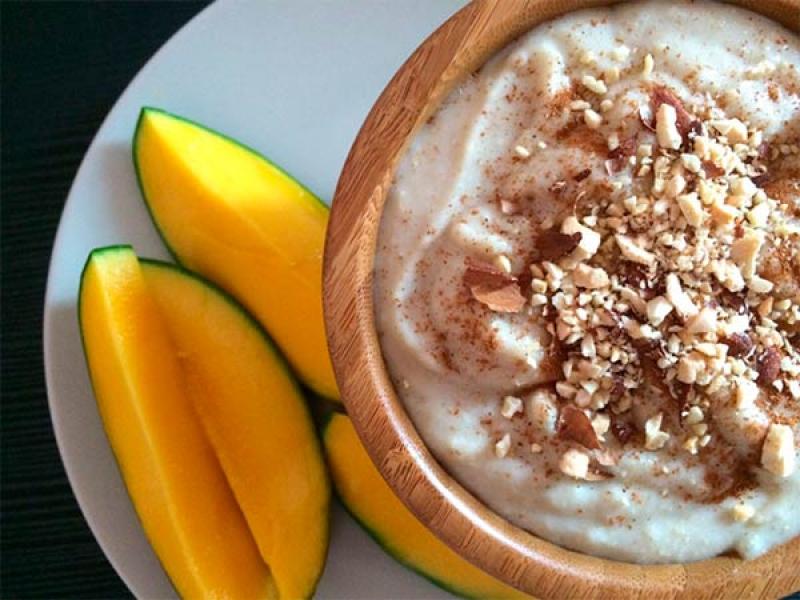